﻿The Origins of the 13th House Mystery School Tradition﻿ 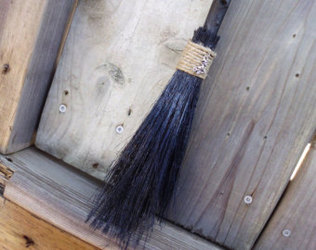 ﻿﻿Thirteenth House Mystery School Tradition of Witchcraft and Shamanism was formally founded over 20 years ago on the Autumnal Equinox of 1993, on a cliff overlooking the Strait of Juan de Fuca and Vancouver Island in Powell River, by eight founding priestesses and a broom.
﻿

The broom was standing in for her priestess, who could not make it, and was duly anointed, blessed, and initiated in her mistress’s stead. Of the original nine founding priestesses, six have remained active in Thirteenth House - Ariel O’Sullivan, Alison Skelton, Ann Lee, Jessica O’North, Daniela Sorrentino, and Yvonne Owens - but the early contributions and wisdom of the others will always be with us. This seems an appropriate time and place to honour their energy, input, and willingness in the co-creation of our unique magical tradition, over 20 years ago.

What defines a 'mystery school' is its centralization and transmission of the wisdom teachings held within a sacred narrative, wonder tale, hera's/hero's journey, healing story, or myth. The collective had actually formed and begun functioning as a mystery school much earlier than the Powell River ceremonial retreat and founding ritual in the fall of 1993. We had already been hosting rituals, workshops, and classes through Triple Spiral and environs for several years by that point. Earlier in1993, between Brigid Day and the Lupercalia, we presented a huge, weekend, wisdom school workshop called "The Mysteries of Mari Anu" at the Coastline Centre in Victoria, formerly at the corner of Moss and May. The central, focalizing, sacred narrative - or 'Mystery' - of this ritualized, experiential teaching centred upon the element of water and the return of the divine feminine. It was attended only by women, and the male partners of both presenters and participants acted as guardians (or 'bouncers') for the two-day event, protecting the thresholds while we worked, celebrated, and journeyed. (The event had been widely advertised and groups hostile to Wicca had been known to picket or otherwise disrupt Wiccan gatherings in Victoria in those days.) On the afternoon that the workshop ended, as all of us drove home to our respective neighborhoods, rain, hail, brilliant sunlight, and multiple rainbows followed each other in rapid succession, all of the elements conspiring to put on a light show, and to signal that they were well pleased.

Our earliest participants included artists, scientists, lawyers, writers, students, herbalists, budding film makers, government workers, homemakers, a ministry head, and many other persuasions of incredibly interesting people from right here in little Victoria (seething, as we know it is, with natural witches, artists, and shamans). Among that initial group were Phylis Songhurst and Vanessa Green. These two constituted our first generation of dedicants. It was their requests for initiation, and the developing interest of many others, that prompted our formal, mutual initiation into this new expression of ancient, collective structure in the ceremonial foundation of the tradition. We had to have a formal collective structure - a living, spiritual, ensouled 'entity' in place to embody the values we were bringing forth (bringing back? channeling from the future? from Gaia?). We needed a committed, sacral community to offer people - a covenant - into which they could enter by degrees, to whatever degree was appropriate for them. We convened and rose to the occasion of visionary collective formation, because we were being asked to, and because it was time.

All of the priestesses named above, with the exceptions of Daniela, Vanessa, and Yvonne, were, at one time or another, proprietors of the Triple Spiral shop and networking centre, either as individuals or in small collectives. This had begun as early as 1989, when Ariel O’Sullivan owned and ran the Black Madonna in the same location in Fan Tan Alley, the forerunner of Triple Spiral. Jessica North supplied the current name when she came into collective ownership with Ariel. Ann Lee, Alison S., and other Thirteenth House Priestesses served as the owner/proprietors of Triple Spiral on its way to the brilliant and ongoing stewardship of Phylis Songhurst.

Through it all, the store served as the natural networking hub, gallery, showroom, theatre and public face (or 'front') for Thirteenth House, promoting our classes, featuring the priestesses and priests of the tradition in lectures, workshops, talks, readings, etc., constantly communicating with the public about who we are, what we stand for, what we do, and registering interested parties for the collectively taught, introductory course in Wicca and Shamanism. When Phylis assumed the helm, she formalized these multiple operations through the Gateway project, which also provides the current classroom. New dedicants came via the introductory course, personal and store contacts. People came to us through many channels.

Thirteenth House has maintained the (necessarily) close co-operation with Triple Spiral as our most public and accessible face, and this is more-or-less how we find the multiple limbs of Thirteenth House working today. The Web newsletter, having been edited by so many of us on its way to Phylis and Robert, has been moribund for a while as we shifted from paper to online publication; it will continue to unify us and notify all of the full-membership, tradition-wide rituals. It represents our social connectivity and is the compendium of our common culture - our unique shared language. (Who, among us, doesn’t instantly know what is meant by "we're in the heart" or "we just came out of the root…" when discussing the Year-and-a-Day Otherworld journey at the heart of 13th House initiation?)

Our tradition has expanded into the hive formation allowed for in the Statement of Belief, anticipating the day when our numbers would make close, regular, magical collaboration among the entire membership impracticable. Our Black Cord Priestesses and Priests now include healers, shamans, writers, poets, artists, community activists, ecologists, scholars, lawyers, editors, and the former senior editor of a widely distributed, prize-winning publication as teachers. Having been around for over sixteen years, we are continuing to grow exponentially from that original, lambent 'Gleam-in-the-Eye' of the Cosmic Creatrix (She of the Many, Many Names).